No boats today, just a smattering of photos I have taken last year. I'm just an okay photographer. Most of my now huge library consists of close ups of my work days, and to be honest none of them are going to win a Pulitzer prize. What I lack in artistic skills I make up for in volume. If you take enough photos some small amount of them actually turn out okay.

Florida is a open carry camera state and I'm always packing two of them with extra cartridges. My phone, and my small Nikon. I buy a new Nikon most years. they get beat up, or lost, and in the case of the last one, run over by a car. Each one is better than its predecessor. I lust after the big digital SLR zillion megapixel cameras with interchangeable lens. Then I look at the price tag, wince, and remind myself I can't stick one of these in my pocket, and just buy a better small point and shoot.

Here are a few snapshots of things that just caught my eye, along with my musings about the subjects at hand. 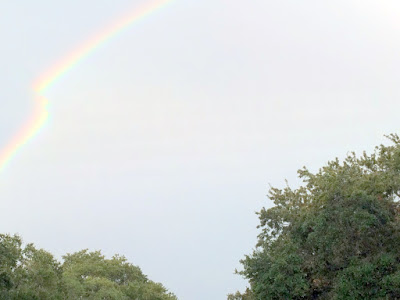 This rainbow shot isn't one of my best technical efforts, but it's one of the most interesting. It had been pissing rain all morning and it was just starting to lift. The rainbow has a distinct jog in it.

This isn't without precedence, but it apparently doesn't occur often and their is little consensus about what causes it. There's a bunch of differing blah blah blah about water droplet size, winds, and air temperature layers. This means no one is sure. I think at the end of this one there is a pot of Pyrite. 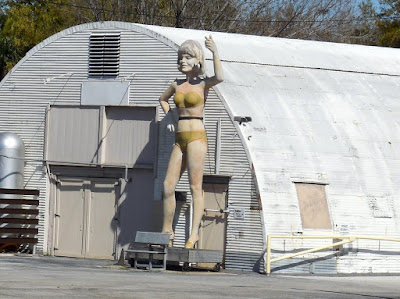 I'm sure there has to be a reason for this about 16' tall amazon to be standing in front of this building. Is she's wearing underwear or a bathing suit?, If it's the former, public morals may be at risk. I remember when the residents of Sarasota in the 60's passed an ordinance to cover Michelangelo's statue of David private parts with a loincloth.

Maybe it's a take off on Vegas Vic. You know the huge cowboy on the casino that had a waving arm and talked. She must have a name, but I'm not sure I need to know it. 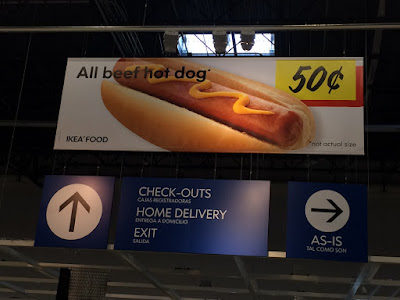 I spotted this large sign hanging in an Ikea store in Tampa. I was ecstatic. Look at the size of that all beef tube steak. It will barely fit in the back of my truck, and it's only fifty cents. Would they help me load it with their fork truck? Does a five gallon bucket of mustard comes with it? I could eat for a month. Whoa, what's with that asterisk, and the footnote in the lower right hand corner? "Not actual size."

You can't even imagine my profound disappointment and it engenders all sorts of questions starting with... What, the hot dog isn't really eight feet long? Who complained about the size the first time the sign was hung, and it didn't have the footnote? If they're telling you it's not that big, then just how big is it? Three inches? This seems a lot like a sticker on a toaster telling you not to use it in the tub. Go Figure. 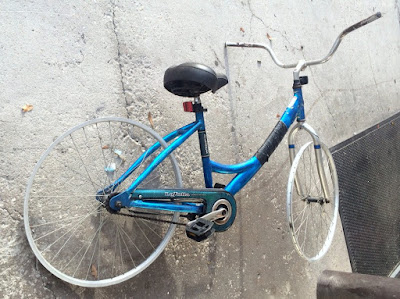 I'm a big fan of form follows function, and this bike tells quite the story. I saw the guy ride it up to the convenience store and lay it down on the sidewalk. We don't need no stinking tires, inner tubes, handlebar grips, or kickstand. I'm still wondering why the seat is still there. I believe entropy will eventually reduce it to a unicycle. 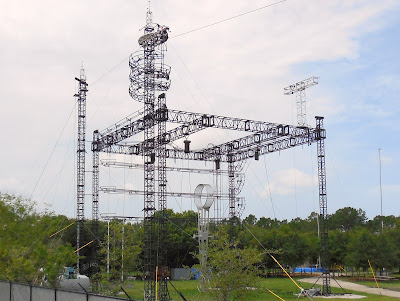 Beats me what this is about. It's impressively large, elegantly engineered, and a costly structure.  At first blush it looks looks like some sort of SETI or DARPA antenna system but it's not. The give away is the motor cycle at the very top of the structure that appears to have been ridden up there on that wire.

A lot of the structure is a trough that something ball like could roll down in a Rube Goldberg sort of way starting with the rotini pasta spiral at the top. But outside of this I'm clueless other than the fact that maybe it's a project of one of the Wellanda's of the famed tight wire walking family. There aren't too many people in the area who ride motorcycles on tight wires in the area, especially me. 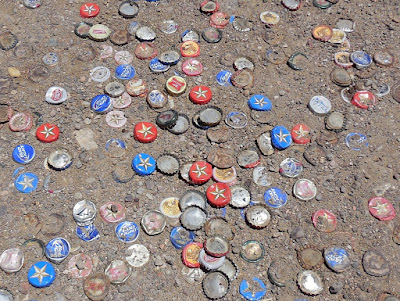 I spent a few days in Marfa Texas last year. Marfa is a little town in west Texas that gives a new meaning to "In the middle of nowhere." It's very cool place I would gladly visit again. Half an eclectic artist colony circa the Grateful Dead 60's. Half a working cattle ranching town straight out Hollywood's central casting. This is recycling at its best being done by the Lost Horse Saloon.

You take the bottle caps collected every day, cast them into the dirt for years, run them over with pickup trucks and you get a hard packed colorful parking lot with a slight umber tint. My statistical analysis says Lone Star is the bar's favorite beer. It was rumored I had a hefty Petron tequila shot with a Lone Star back there. I'm neither confirming or denying this. 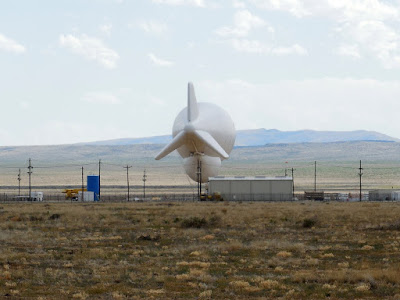 Lastly from the "You don't see these every day" department is the Marfa Areostat being ever vigilant on standby.

The pregnant belly holds a genset, radar, and other surveillance technology. It has a 25,000 foot tether attached to a winch. There are six of these scattered along the Mexican border.

Originally developed to locate low flying drug smuggling aircraft, it doesn't appear to have a great deal of important functionality today. The Marfa system appears to only be used about half of the time.

Hmmm, seems like it would be a lot cheaper to stick a bunch of Furuno radars on tall towers with automatic ARPA target acquisition software. Their radars are both bullet proof and inexpensive, at least relative to what the government spends on an Aerostat's and its radar. Link them together with microwave transmitters along with slewing FLIR infrared cameras to give you a view of the detected target and it's location. Oh wait a minute, isn't that what what the TimeZero system is basically already doing for a fraction of the costs, and it operates 24/7?


I'll leave this with a few new year predictions:

It will be a good year for boaters and boating technology.

Captain Morgan will still be at the helm of way to many vessels so watch out.

Slightly less than half of the population will be upset about the presidential election results. Don't worry we get to do it again in 2020. I can hardly wait.

Be safe out there and have a good year.

All photos were taken by the author.