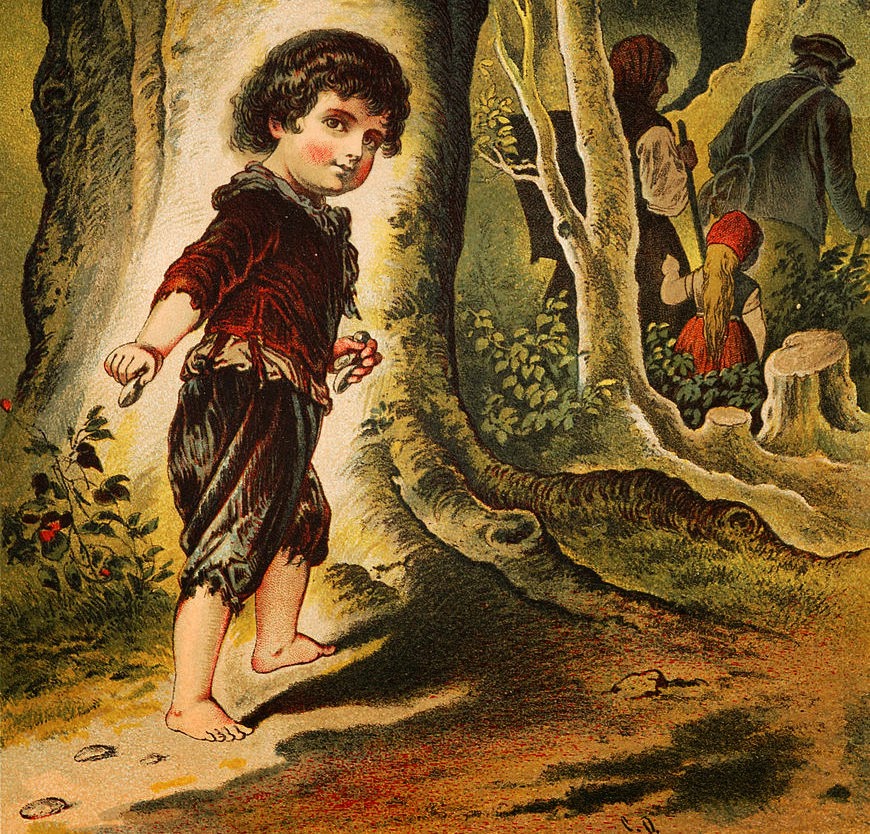 Tracks are a valuable navigation resource, if properly used. Not properly used they can make a mess of your display, obscure navigation chart features, be a tattle tale, and can even hurt you in some cases.

The first question answered is what is a trackpoint? Track points are really low budget waypoints usually displayed on your chart as a dash esque line thingy. These points are compactly stored in your chart plotter. Each typical trackpoint consists of the location lat/long, water depth and temperature if available, and a timestamp.

In most systems you can start and stop tracks, clear tracks, save tracks, change their color, control how often you throw a breadcrumb overboard using either time or distance, name them and turn them into a route. The converting to route stuff is a little later.

In the Grimm story Hansel used a pocket full of pebbles to mark his first path. New chartplotters give you many thousands of track points to mark your path.

Okay most understand the concept but what is the real purpose of these bread crumbs. There are two. The most common one is you go some place and then conditions change like it gets dark, foggy or that third bottle of wine has addled your navigational skills.

Now bare in mind this is just a theory. What you don't really know without making some effort is what was the tide height at the time you made the track? It might have been a 2' plus tide when you made it and now it's a 2' minus tide. That difference makes your props or keel now 4' closer to the bottom.

There is really a higher and better purpose for using tracks and that's creating what I call "Get Home Safe Tracks."  This is how it works. Say you have a local less than great pass. Where I live there are a bunch of these shifty entrances coming in from the Gulf.

This is what you do. On a nice day, at a lower tide go to the inside of the pass and stop. Clear your current active track. This typically allows a new track to start. Since you have good visibility, and with a lowish tide use the best route you can going out the pass and go half a mile further to a spot with good deep enough water and stop. Now bring the boat to a halt, save this track, assign it a happy color like red and then give it a name like "Big Pass."

What you now have on your chart is short red dotted line showing your way through the pass. Simple enough. But why go further out? Done well this insures that you can make an oblique angle approach to the pass without smacking a sandbar, rocks or the ilk. It's a Bill safety first take on the problem. You can do the same thing in other environments. A path off of the intercoastal to your canal or that tricky path to your shallow redfish hole. This is really what tracks are all about.

You can take tracks and convert them to routes, but I'm not a big fan about doing this for a couple of reasons. I'm going to start with the movie line "There's no crying in baseball " and my line "there are no curves in marine navigation." Even great circle routes are straight lines bent around the globe.

If you're not using an autopilot, then we all steer somewhat like drunken sailors. If you don't believe this look at your wake behind you. On a perfect day you can do a pretty good job of steering small. On a windy wavy day you can be pushed to and fro. 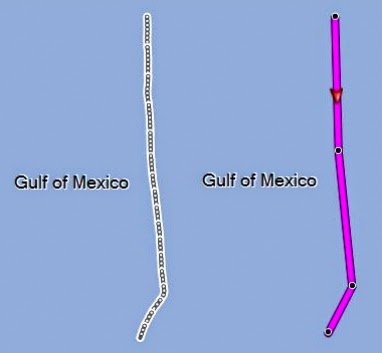 When you ask your chartplotter or navigation software to convert a track to a route it has to take your wobbly line and convert it into a series of straight line segments. This little .4 of nautical mile track was pretty straight. It was converted into three straight line segments all pretty much matching the original track. Close enough for navigation work, but what happens if this was a curvy track? 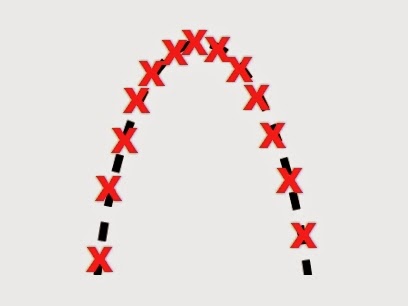 You you can get waypoints, and brother you can end up with a lot of them. As curves get tighter, it takes more and shorter segments and waypoints to match the curve.

You thought to yourself at the start of the fifty mile yacht club trip, "I'll make a track out the trip." You clear your active track and go off on a new track winding through the intercoastal, out a pass, back in another pass to that twisty section of the intercoastal and finally to the marina.

There it is in all of its glory. You're clever and read the manual. you name it, change the color to green, and then you make the fatal error. You decide to convert your fifty mile track to a route thinking the autopilot can do all of the work to get you back home.

Alas this is where things often go awry. You look at the new route and it now contains over a thousand waypoints. Yes this is entirely possible and I've seen much bigger numbers. There is a second problem you haven't noticed yet. The tighter the track curves, the more waypoints the system makes when converting it to a route. Autopilots require permission to take any turn to advance to the next waypoint. This isn't typically a problem if waypoints are miles apart, but if they are 30 feet apart in places and you have hundreds it will become at a minimum annoying.

Here is another issue. You may confuse your autopilot system but more likely yourself. Having densely packed waypoints being used by an autopilot means that you can sort of arrive at multiple waypoints all at once. This isn't exactly what's happening but it's the way it can appear. A lot of this depends on what distance you have the waypoint arrival alarm set at. It's likely something like a tenth of a nautical mile (about 600 ft).

I'm okay with turning tracks into routes, when autopilot control is desired and the track is generally straight and short enough that the conversion doesn't create a zillion waypoints. There is a final reason not to convert long twisty tracks into routes. When you realized the error you just made and deleted the route, depending on your system getting rid of the thousands of new waypoints may not be so easy. Okay delete, delete, delete, delete, delete, how many have I done? Only five of 2349? The hell with this, it's time for a frontal lobotomy chartplotter. Master reset time!

Homework? Read your manual's section on tracks and waypoint arrival alarm. My description is general and everybody does it a little differently. Darwin will grade the test afterwards.
Posted by Bill Bishop - Parmain at 2:25 PM