I will be the first to say that step hull designs have shown marked improvement over the years, and also that I'm still not quite a fan yet, but I'm getting closer. I'm however adamant that 2nd stations should not be added to these boats without consulting with the designer first.

I get the fuel efficiency argument, but then again if the boat's cost is north of $300,000 with quads on the back burning 100+ gallons per hour, do you really care about fuel savings? It's like asking the buyer of a new 70' sportfish if he's interested in the new green super fuel efficient 450hp hybrid diesel power package. I can hear the buyer's snorted guffaws now.

So what's my latest beef about these boats now? Too often the efforts that go into designing these high speed fishing machines and recreational boats don't seriously consider installation of all the amazing sonar technology that's available to help you actually find fish and the bottom. This conversation to some degree also includes the more traditional hull designs many of which don't do any better. 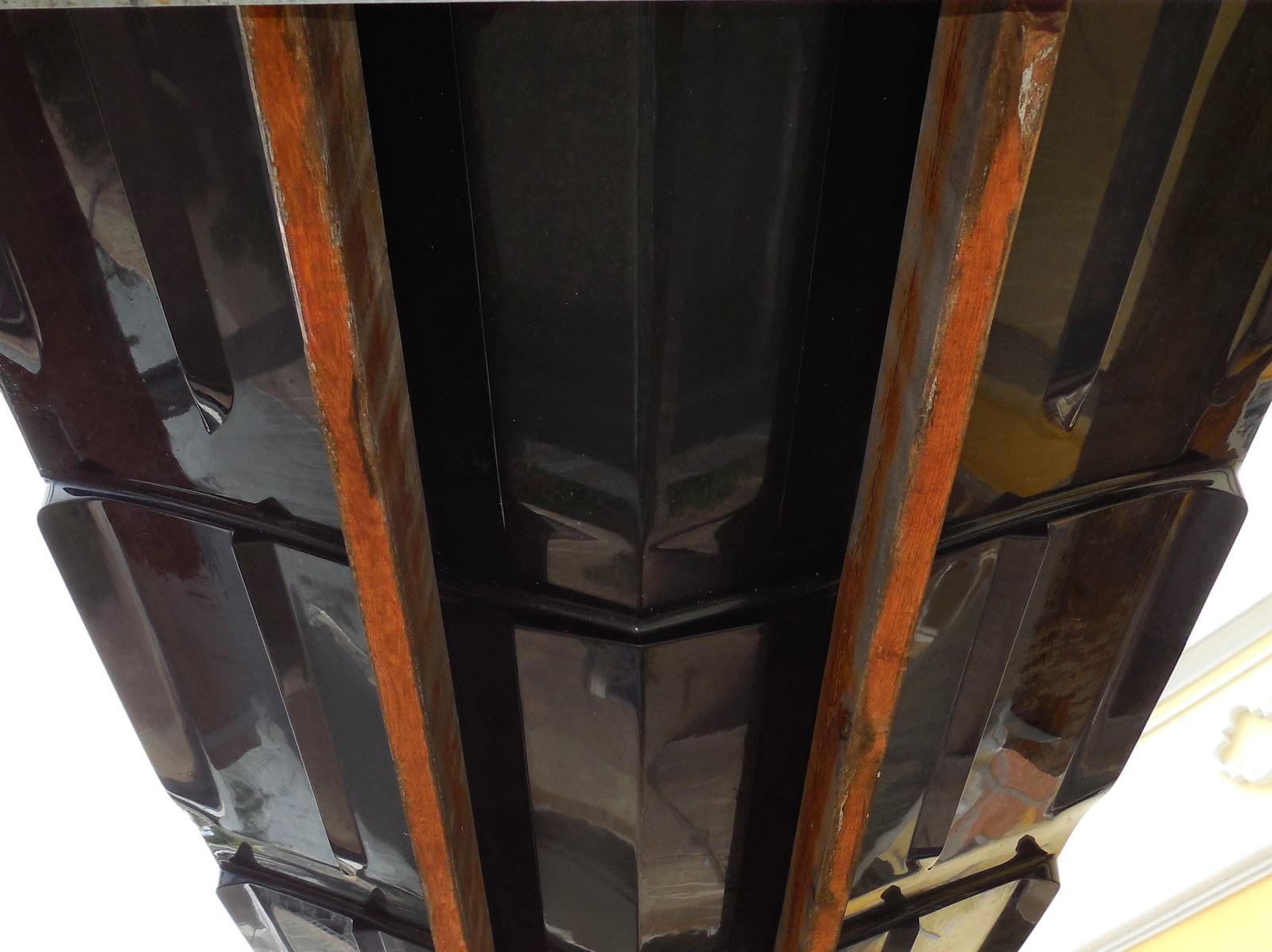 It was only a very few years ago when fish finding tech was simpler. There were 50kHz and 200kHz transducers or a combination of both. Most were 600w units and a biggie was a 1000w. Today there is a plethora of technologies and systems available.

Traditional, CHIRP, Chirp wide, down scan, side scan, and forward scan. Frequencies now range from about 28kHz to nearly 900kHz and power output can be up to 3000w. Sonar technology is still evolving rapidly. It's a rare boat that doesn't need or have a depth finder system, and many boats have two or more.

First the basics. Any location aft of the steps is not suitable for any transducer installation if performance is desired at any speed above an idle (up to about 6-7 kts). This on most step hull boats leaves you with a small area just forward of the steps. On the average center console step hull boat this is located under the deck inside the console, or just forward of the console.

On most step hull boats you end up with a triangular location between stringers sometimes with a flatish strip at the keel line. In the theoretical world you would like to have an area that all has the same hull thickness not to exceed a half an inch and both kevlar and foam free. This would allow installation of inhull tank style transducers. The deadrise hull angle should be less than 20 degrees allowing tilted element transducers to be installed. 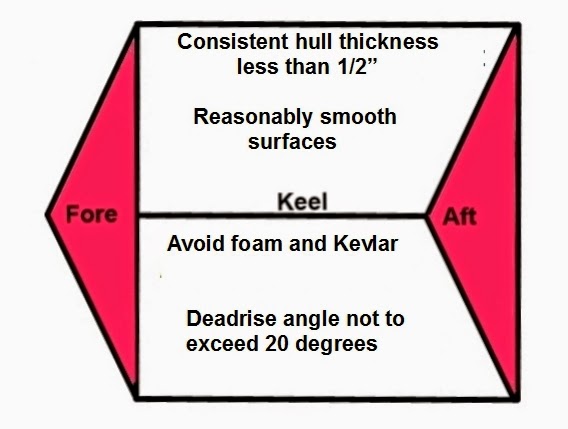 The space should be large enough to accommodate in hull, pocket mounted, tilted element units on both sides, and side and down view transducers.

In general the interior surfaces should be relatively smooth. By that I mean no big blobs of filler putty and hypodermic needle sharp fiberglass spikes of death. In other words someone should have expended a couple of minutes to whack at it with some 80 grit paper on a sander while it's easy to get to at the plant. The owner will not likely never see this area, but I have to work in it.

When buying a step hull boat there are a few other things to keep in mind. These include access to the transducer, the level of effort needed to change an existing transducer, and are you going to trailer the boat?

Keel pocket mounted transducers are a common approach for many step hull boats such as the eight element B265LH CHIRP transducer to the right.

This keeps the boat more trailer friendly, and the transducer is located in the lowest (best) possible location. The disadvantage of this approach is replacing a pocket mounted transducer downstream is both an expensive and major job. It's definitely not a DIY project for most.

The other variant to this approach is to cut the stem hole for the transducer on the keel center line. Install the transducer, and then fair the protruding transducer into the hull. This is not attractive to me because the transducer becomes the first object to arrive at the scene of a grounding and it may make trailering difficult. 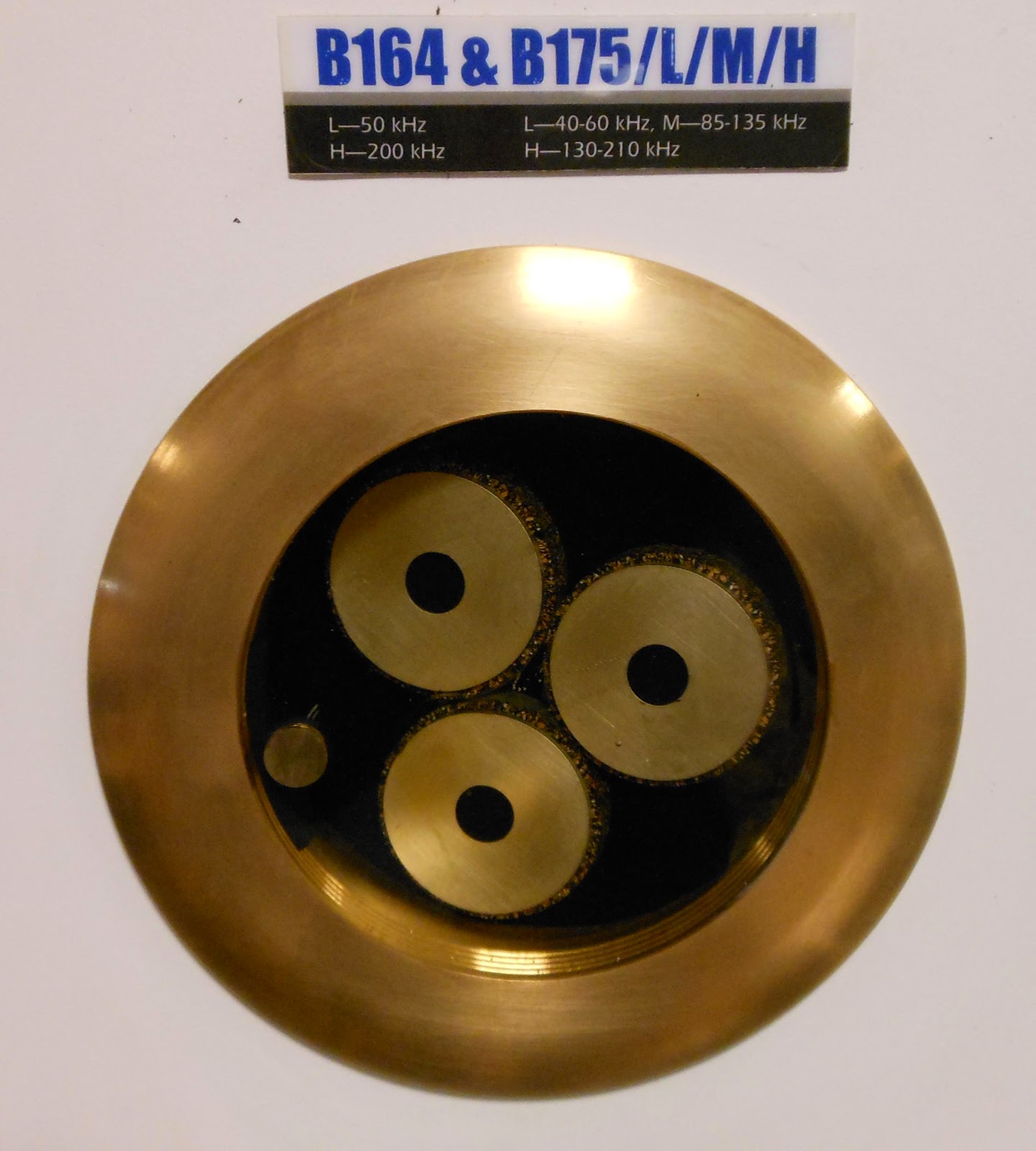 The next option available for these boats are tilted element transducers such as the pictured B175 CHIRP unit. The high and medium frequency ones are available in angles of 0, 12, and 20 degrees. The low frequency version is 0 or 12 degrees. They work well, but only cover one frequency range. Want two ranges? You have to buy two transducers.

It's important to know what the deadrise angle is in the potential transducer mounting location. As an example if the deadrise angle was 20 degrees, the low frequency B175 version may be shooting off at an awkward angle. It will be pointed 8 degrees off of straight downward.

After this transducer options for most step hull boats become pretty slim. I'm aware of only only one step hull production boat that can accommodate an in hull tank style transducer and it can be up to the 25 element Airmar R599. This is the bad boy of all transducers with 3000 watts of low frequency, and 2000 watts of high frequency power.

Trailers for step hull boats can be similar to a standard deep vee hull trailer, or depending on the hull shape very different. If your going to by a new step hull boat with a trailer look closely at its bunk set up and factor this into your transducer style and location options.

Here is my summary. If you are a sonar technology intensive fisherman, then you should look very closely at a step hull boat's potential transducer limitations. If I was buying one of these boats I would go so far as asking the dealer to open up the transducer installation location for viewing before making a purchase. I think this offers a couple of benefits. If the designers and builders knew this was going to happen you can bet they would pay more attention to this area. The buyer can also see for themselves what "art of transducer installation" is possible and the quality of the interior construction. This is often an eye opener for me.

There is nothing inherent about the area just forward of the steps that stops it from becoming more "Transducer Friendly" but too many are not, or your options are very limited. I know with a little effort this can be better. At the minimum this location's hull layup could be reconfigured to create a good acoustic window allowing tank in hull transducers to be installed. It only it requires a 6" by 8" spot with a deadrise angle of 22 degrees or less to install Airmar's largest and best CHIRP in hull transducer (R599). I think this would be the optimum. No penetrations or bulges changing the water flow to the steps, trailer friendly, and the ability to use the best of transducer technology. Add to this adequate access for installation and you would have a winner. There is nothing that will give an installer a sinking gut wrenching feeling more than staring through a tiny access hatch at a transducer you can barely touch.

Like I said in the beginning. There are some manufacturers that do take this seriously, but it seems to be an after thought more often than not for most. "Don't worry buddy, your installer can figure out a way to get some sort of a transducer into the boat. Hey, do you want to go real fast, or see fish? This boat can't do both well. Think of all the gas you will be saving. Sign the contract right here, and here, and here." We'll figure something out."
Posted by Bill Bishop - Parmain at 1:41 PM