The captain successfully single hands the down east style yacht out of the Lake Okeechobee Mayaca lock. He throttles up headed toward Stuart Florida. Almost immediately there is a problem. The boat seems sluggish, and not very responsive in the water. He glances back and sees a a 20' high vertical wall of water rising from the stern. Throttles are slapped back to neutral. The wall of water immediately disappears.

He now realizes the hydraulic swim platform carrying the dingy has been somehow actuated and sank fully downward. The dingy now full of water is nearly underwater. He is familiar enough with the boat to know there is a manual wired pendant in the engine room. Using this he raises the platform in small increments allowing the water to drain from the dingy. Shortly all is well. The engine's motor wasn't submerged, so in the end there is no damage. 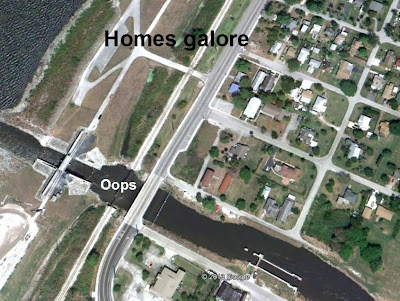 He's concerned about how this could have happened. He finds the manual for the platform lift, and quickly reads it, but there is no real help to be had. He calls the manufacturer and asks how this could have happened? Their response is the system must have been turned on by another remote control unit, and why wasn't the platform breaker turned off? I didn't know it should have been turned off retorts the captain. It doesn't say anything in your manual about that. You're supposed to know that already, says the manufacturer.

So if this is so important where is the breaker? A call to the boat builder provided some limited advice. "Look in the engine room, it's there somewhere. About 15 minutes later, what is lost is found and turned off. 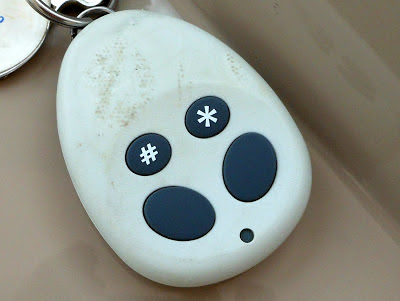 It isn't obvious to every traveler on this stretch of the Intercoastal waterway that up on the bank of the canal there's a large subdivision full of remote controls. Kids with RC cars, garage door remotes, and I'm guessing a lot of TV's wireless doorbells and cars with remote key fobs.

We will never know where the spurious signal actually came from, although the likely source was the subdivision, or possibly another boat.

They come in three frequency flavors. 315MHZ (Mostly US), 433MHZ (Mostly Europe), and 2.4GHZ (Mostly RC use). Since we discovered what a radio is frequency is, we have been dicing and slicing them up. I put circles around the three discussed frequencies, but if you want a good view, you can find it here. This as geeky as the dissertation is going to get. 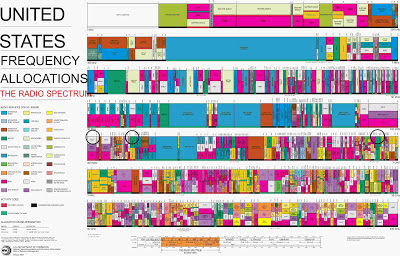 So here's the catch. These remotes can have complex communication systems, or very simple ones, which most of them are. If the receiver hears the signal, something turns on or off. Since money is paramount, many manufacturers lean toward the El Cheapo very simple code versions. I can buy a  simple remote, and a receiver for less than $7.00.

So what to do about all of this. I suspect that the odds of encountering the incredible sinking transom platform are not great, but as the captain unfortunately discovered it's empirically possible. The fix for all of this is to turn off the breakers to critical devices, and turn them on when needed. Boat lift manufacturers know this can, and has happened, and most advise in their manuals to remove the power when not in use.

The Parmain top secret laboratory has examined this situation, and has another solution. For those who don't want to crawl into the 130 degree engine room, clamber over the exhaust system, and use a boat hook to turn off the breaker located behind the hot water heater, I introduce the "Frequency Jammer" option. 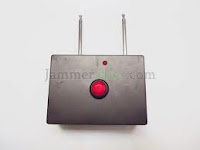 I picked this Jammer Fun unit off of their website. It costs $87.00 and shipping is free. I liked the fact it runs on both batteries, and has an AC adapter, but best of all the big red nuclear style button in the center. I could swivel around in my command chair and order, "Engage Jamming" number one. Nobody's remotes will then work in about a 200' radius including yours.

Since it runs on batteries you could have all kinds of fun. Drive into a car lot, and make a fun video of salesmen embarrassed in front of their customers because the new car won't unlock. Or block your neighbor from opening his garage door or security gate, and stop that pesky kid from using that noisy toy car. It will be fun for the whole family, until they chase you down the street brandishing pitch forks and torches. Just throw the breakers off, and this can't happen to you.
Posted by Bill Bishop - Parmain at 11:47 AM