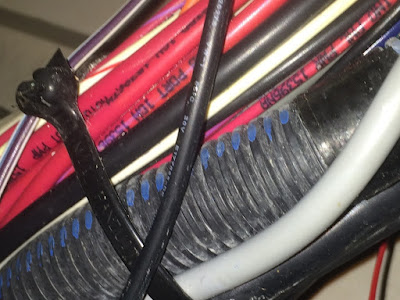 It's not an earth shaking problem by any means, but is a portent of what's to come. I'll save everyone the suspense, the stereo speakers have a whining sound. This similar to the noise those of a certain age will recognize as being like alternator noise sometime found in car stereos of the past.

In this case the noise is coming from a Mercury Verado steering pump. You can hear it spool up on the stereo speakers it and persists in a high pitch whiny way.

The problem most likely is, gird your loins for really big words now, "Electromagnetic Interference by Induction." Okay it's a mouthful but not really that complicated, and by design boat builders need to start paying more attention to this sooner than later. Just for the record this interference problem could also be caused in part or exacerbated by a "Ground Loop" but since there is only one grounding block on the boat I don't think this is the problem.

If you go back a decade or two or so boats were electrically simple. DC and AC circuits, NMEA 0183, SSB, VHF and stereos round out the collection. Boats are increasingly using a myriad of communication technologies. Wireless remotes, Ethernet networks, NMEA 2000, CAN bus, WiFi, ANT, Bluetooth, cellular, and these are the common ones new boats can have. Now add sat comm systems,  power distribution, embedded computers and the list just keeps going on.

The picture above illustrates the basic problem my stereo has, and one that most boats suffer from to varying degrees. In the picture what's in that wire bundle going to the upper helm? Everything! From DC and AC power wiring to communication cabling all in close proximity. This brings up the problem of induction. Any wire that carries a current creates an electrical field around it. Remember as a kid you learned that you could wrap a bunch of coils of wire around a nail, add a battery and make an electromagnet? So in a big bundle of power wires these fields can interact with each other. On a boat these aren't typically huge fields, but things happening on one wire can impact another one right next to it.

Sure, I could have cut a zillion tie wraps. Back pulled the speaker wiring. Bought specially shielded speaker wire online. Pulled in the new wiring and likely the problem would go away completely with a hefty cost that no one would be willing to pay but that's not the point. The real point of this piece is to opine that boat wiring systems need to designed in a more structured way, separating out and away the wiring pulls for low voltage wiring and communications.

It's a testament to the quality of marine cabling, and its shielding that more of these problems don't pop up, but maybe they do and I just don't hear about them. The density of electronics inside boat consoles is dramatically increasing. A sea of black boxes and interconnect communications cables all packed and tightly intertwined with portly power cables driving noisy pumps, relays, lighting, trim tabs, refrigeration and air conditioning compressors, microwaves, TV's, cameras and you get the drill.

The only whine left to squelch is my lament about the lack of  good design, anticipation of what buyers will add and wiring diagrams.
Posted by Bill Bishop - Parmain at 10:43 AM